The Victorian Era is named after Queen Victoria, whose reign over Great Britain lasted from 1837 'til her death in 1901.
SHOP VICTORIAN ERA JEWELRY 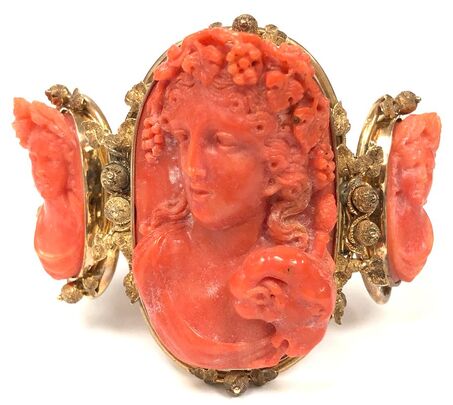 Prior to the 1850s, jewelry was completely handmade.  But with the Industrial Revolution moving forward, factories were opening at a fast pace and jewelry was no longer required to be made by hand.

Prior to the California Gold Rush (circa 1848-1855), it was also common to find lower karat gold jewelry in British-made pieces, due to a gold shortage.

Acrostic jewelry will feature multiple gems, where the first letter of each gem will spell out an endearing word.  For example:  Lapis, Opal, Vulcanite & Emerald = LOVE.

​Hair jewelry was popular during the Early Victorian Era.  Human hair would be woven into extremely intricate designs and set behind glass, as a memorial.  Other times, bracelets and necklaces would be composed entirely of woven hair.

Diamonds were fashioned into old mine cuts or rose cuts.

Prince Albert proposed to Queen Victoria with a serpent ring set with an emerald in its head.  This created a trend of snake-themed jewelry, symbolizing eternal love.

Due to Queen Victoria's love for cameos, these carvings became very popular during the Victorian Era.  These hand-carved cameos were carved out of various shells, gemstones, coral, and even lava rock. 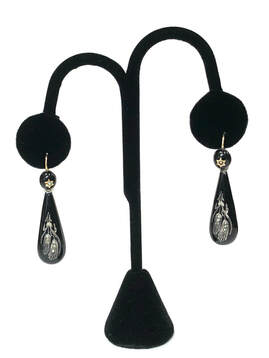 Victorian Era mourning earrings featuring seed pearls set in silver over gold
After the death of Prince Albert in 1861, Queen Victoria went into mourning and began wearing all black, including her jewelry, which popularized the trend of mourning jewelry during The Grand Period.

The incandescent light bulb was invented in 1879, influencing jewelry design under these new lighting conditions.

Circa 1880, the price of silver was lowered when silver was discovered in Virginia City, Nevada.  This led to a renewed popularity in silver jewelry where large, heavy, silver lockets and necklaces were produced.  Lockets and brooches were often engraved by hand, or machine stamped, with monograms, dates, mottos, or other decorative motifs.

Doublé d'or, or rolled gold plating, allowed for a thin layer of gold, 10 karat or finer, to be mechanically fused to a sheet of base metal.  The karat gold layer makes up less than 1/20th of the total weight.  These bonded sheets were then cut or stamped into jewelry items.

Die stamping and gold plating were developed during this time, allowing for inexpensive jewelry to be mass produced and sold to the rising middle class.  These mass produced pieces were often engraved by hand and then finished with a taille d'epargné enamel technique.

Bracelets with buckle designs were very popular during The Grand Period, as were wide, mesh bracelets and wide bangles.

Micro mosaics were being assembled throughout Italy in Venice, Rome and Florence.

Old mine cuts and rose cuts continued to be used, as well as cabochon cut gems.

Circa 1870s, opals became popular when a large opal source was discovered in the British territory of Australia.  Prior to then, opals were thought to have brought bad luck.  This is likely due to a story in the novel "Anne of Geierstein", written in 1829 by Sir Walter Scott, that contains a story of an opal hair ornament that brought bad luck to its owner.

Realistic looking insects were popular motifs that would find themselves landing on the hats, veils, shoulders and sleeves of many Mid Victorian Era women. 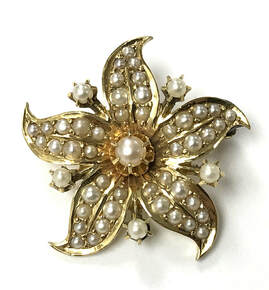 Late Victorian Era star brooch featuring seed pearls set in 14K gold
By 1885, Queen Victoria had been mourning the death of her husband for nearly 25 years and her subjects began to grow tired of the dark, gloomy themes from The Grand Period.

With electricity now in homes, the entertainment industry went through a boom.  Actors and actresses became fashion icons, setting trends for the thriving middle class.
​​

​• Machine-Made
​
Nearly all jewelry during The Aesthetic Period was machine-made.  However, many jewelers resented the influx of mass-produced jewelry and continued their focus on handmade jewelry.

Manufacturers began stamping their maker's mark on their jewelry, signing their work.

Small brooches were popular during The Aesthetic Period, oftentimes with multiple brooches being scattered across the neckline.

Tiffany & Co. popularized the simple, solitaire engagement ring during this period, circa 1886.

Old European cut diamonds began to be used in Late Victorian Era jewelry, along with old mine cuts and rose cuts.