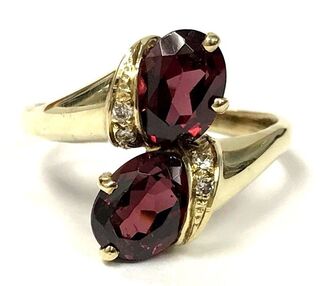 Rhodolite & diamond bypass ring
Rhodolite must have a purple component.

​Rhodolite garnet may contain needle-like inclusions that intersect at 70º and 110º in the same plane.

Rhodolite may also contain high and low-relief crystals, as well as included zircon crystals.
​
​Garnet is a January birthstone and is the 2nd wedding anniversary gemstone.