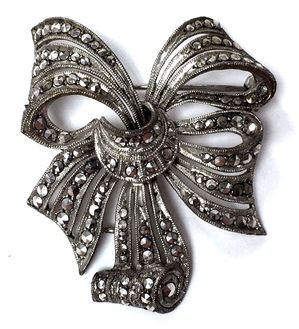 Vintage ribbon brooch set with "marcasite" (pyrite)
Pyrite, often incorrectly referred to as marcasite, is a metallic gem with a brassy or silvery appearance.

Pyrite is typically faceted into rose cuts and set in sterling silver jewelry.

Pyrite is also known as "fool's gold", due to its golden metallic luster.

Marcasite has an unstable crystal structure, causing it to crumble or break apart rather easily.

In some cases, marcasite will react with moisture in the air, creating sulfuric acid.  For these reasons, marcasite is never used in jewelry.