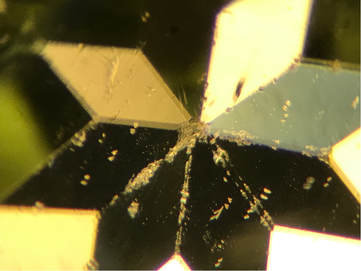 Peridot has noticable "doubling" when viewed under magnification.
​
Peridot is a very attractive greenish yellow to yellowish green gem.

​Ancient Egyptians called peridot "the gem of the sun".​

Some peridot dates as far back as 4.5 billion years ago, being found in pallasite meteorites.

In 2005, peridot was found in comet dust brought back from a robotic space probe.

Due to its relatively high birefringence, peridot can display visible doubling.

Peridot is an August birthstone and is the 15th wedding anniversary gemstone.​
​