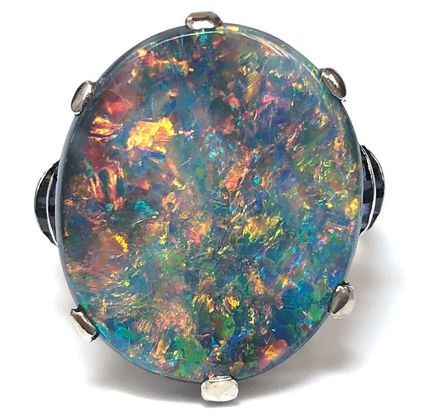 ​Opals are unique gems that contain up to 20% water trapped inside their silica structure.

Opals are known for their unique phenomenon called play-of-color.  Opals are made up of sub-microscopic spheres stacked in a grid-like pattern.  As light passes between the spheres, the lightwaves bend, breaking up into different spectral colors.

However, not all opals display play-of-color.

Fire opals are a transparent yellow to orange, to orangy red, and can be with or without play-of-color.

In 1938, the Aurora Australis opal was dug up from an old sea bed at Lightning Ridge, New South Wales and is considered to be the most valuable Australian black opal.  In 2005, it was valued at AUD$1,000,000.  Aside from its vibrant blues, greens, and reds, it also has a distinctive impression of an actual starfish on its reverse!

The Fire Queen is a famous opal with an unusual history attached to it.  Originally named The Dunstan Stone after its finder, Charlie Dunstan, this opal weighed over 900 carats and was deemed "too beautiful for words".  At the time, Dunstan wound up selling the opal for a mere £100.  After losing two more stones of value, Dunstan was found dead as a result of suicide, in 1910.  In 1928, after changing hands several times, the opal wound up in the Chicago Museum.  In the 1940s, J.D. Rockefeller purchased the opal for £75,000, adding it to his personal collection. 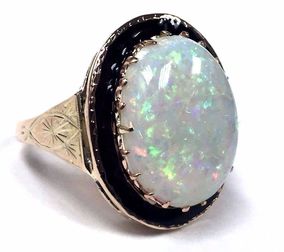 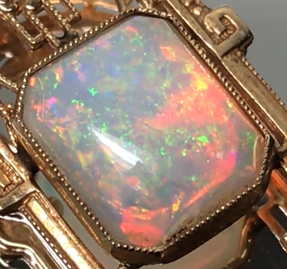 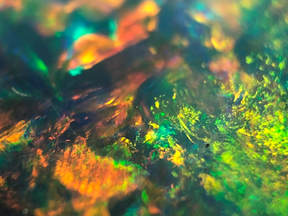 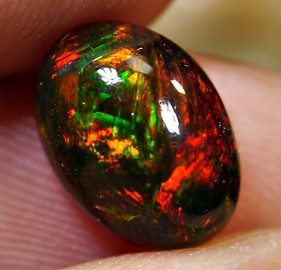 Photo courtesy of Opal Auctions
​Usually has a lower RI than untreated black opal (1.44 to 1.45 RI).  Black carbon particles visible in and around gem opal, as well as in the surrounding matrix.  Appears in a mosaic pattern and will show white material underneath the surface at chipped areas.

​1.38 to 1.39 RI.  Has a dark brown, mottled appearance with unnatural play-of-color.  Turns black when wet, but blackness disappears as the stone dries. 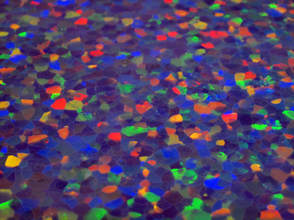 Photo courtesy of synthetic-opals.com
​Use magnification to observe a "chicken wire", "snakeskin", or scale-like structure.  May show columnar structure when viewed from the side. 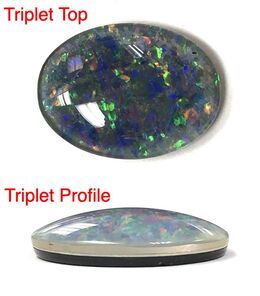 ​Opal triplets use a thin piece of opal sandwiched between a dark backing (usually black onyx) and a clear top (often clear quartz or glass).