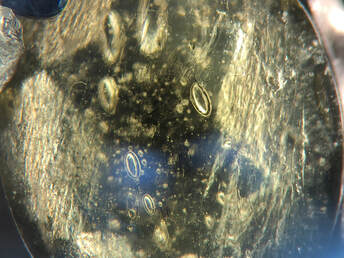 Elongated gas bubbles in moldavite
Moldavite is a type of natural glass created by a meteorite impact.

When a meteorite crashes into the Earth's surface, it causes the surrounding rocks to melt, creating moldavite.

Around 15 million years ago, a meteorite crashed into South Germany, creating what is now known as the Ries Crater.

Moldavite is only found in the Czech Republic and Southern Bohemia regions.  In some cases, over 300 miles from the site of impact!

It contains round or elongated gas bubble inclusions, and may have visible flow lines caused by lechatelierite​ inclusions.
All photos courtesy of Scott Papper, GIA GG, AJP, CMA (NAJA)
​Click the button below to subscribe to our YouTube Channel!