The first letter, T, is the city letter.

The second letter, E, is the first letter of the smith's last name (or company name).

The number after the dash, 43, means this silversmith is the 43rd smith whose last name starts with the letter E, in the city of Taxco, Mexico.


There are literally thousands upon thousands of these marks, most of which are still unidentified.
​ 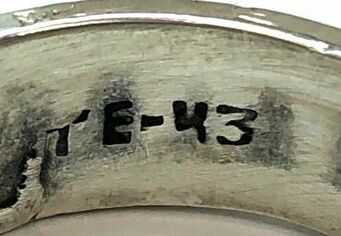