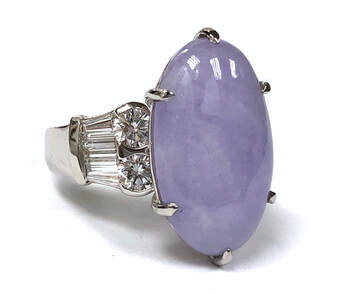 Type A lavender jadeite jade set in a heavy platinum and diamond setting
There are two different types of jade:  jadeite and nephrite.

The most valuable color of jadeite is known as imperial jade, which is a fine, emerald green color with a beautiful translucence.

Jade is a relatively soft gem, making it a great gem for carving.  Although soft, jade is a very tough gem (i.e. difficult to break).

​Jade has been appreciated in Chinese culture for thousands of years, and is often carved into symbolic figures such as Buddhas or pierced discs.  Jade was originally thought to be an object that possessed a spiritual connection but would later represent a symbol of status.

Untreated jadeite (can be routinely waxed)