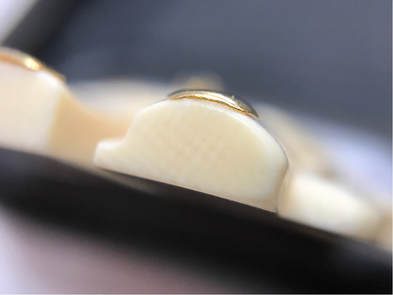 Crosshatch graining is a characteristic of natural ivory
Ivory is a hard, white, organic material made from the bones and teeth of animals.

Ivory is most commonly obtained from elephant tusks, although it is also derived from mammoth, warthog, walrus, whale, hippopotamus, and narwhal.

Due to the value of ivory, people began hunting elephants for their tusks, causing a rapid decrease in elephant population.

In 1989, the United States implemented an immediate ban on elephant ivory imported from Africa, in an effort to reduce elephant poaching.

Natural ivory has wavy structure lines or a crosshatch pattern, known as engine turning, that is only visible from certain angles.