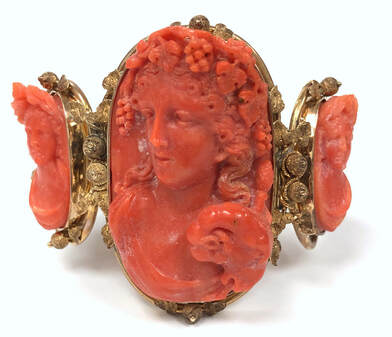 Museum quality carved coral cameo station bracelet from the Victorian Era
Coral is a living marine organism that forms in branch-like structures in tropical and sub-tropical ocean waters.  When the coral polyps die, a dull, hardened skeleton remains that is polished to a waxy luster.

Most coral is white to cream in color.  Red to pink colored coral are the most valuable, and are considered precious coral.

Like pearl, coral is an organic gem that has been cherished for centuries.

Hand-carved coral cameos were popular as far back as the Georgian and Victorian Eras (circa the 18th & 19th Centuries) and are still prized by knowledgable collectors today.