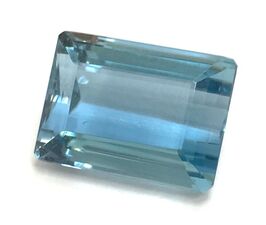 Emerald cut blue topaz
Although topaz occurs in nearly every color, blue topaz is the most popular of all topaz colors.
​
Some topaz crystals are so large that they are weighed in kilos, not carats.

Topaz can take such a high polish that it is slippery to the touch.

Although usually undetectable, most blue topaz has undergone a routine irradiation and heating process to achieve its attractive blue coloration.

London Blue Topaz is a darker blue, dark in tone.
​
Blue topaz is a December birthstone and the 4th wedding anniversary gemstone.​
​